Heart arrhythmia is a set of conditions where the heartbeat is irregular, too slow, or too fast. Bradycardia: A heart rate below 60 Tachycardia beats per minute: a heart rate in adult symptoms above 100 beats per minute: Arrhythmia typically has no symptoms. Yet some symptoms usually found in Arrhythmia patients, such as lightheadedness, palpitations, or feeling a pause between heartbeats, shortness of breath, passing out, or chest pain.

Diagnosis: The Electrocardiogram (ECG) and Holter monitor are different tests and procedures that can aid in the diagnosis of arrhythmia.

Treatment: It is possible to treat most arrhythmias effectively. Treatments may include medicines such as beta blockers, surgery, different medical procedures such as installing a pacemaker or procainamide agents to restore normal heart rhythm. Many forms of cases of arrhythmia lead to sudden death or heart arrest.

Atrial fibrillation affects about 2% to 3% of the population in Europe and North America as of 2014. 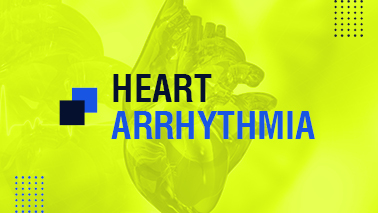